I've heard of chess pie for years, but have never seen one nor had the opportunity to try a slice. I don't recall ever even having seen a recipe for chess pie. 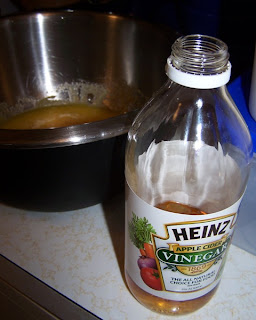 The most intriguing ingredient is a tablespoon of vinegar (Ken Haedrich says that either cider or white vinegar would work; I had cider vinegar on hand). I've had vinegar pie before in Tennessee -- keep an eye out in May for this treat -- but other than that I've never heard of vinegar in a dessert.

Assembly of this pie was simple: the shell is unbaked before filling, and the filling is just whisked together cold and poured in to the shell. I would recommend fully softening the butter before adding. I tried to rush things, resulting in big chunks of butter (although I'm not sure if this made any difference in the result). 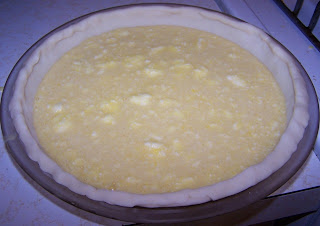 The recipe from Pie calls for baking 30-35 minutes until a knife inserted at the center comes out clean. After 35 minutes, the pie had browned slightly, but was still very 'jiggly' and my tester came out wet. I thought the pie might set up as it cooled (and it was getting late), so I pulled it out and set it on the rack.


The next morning, I went to check on the pie. While the top 'crust' (a result of the tablespoon of cornmeal in the filling) had firmed up slightly, the filling still wobbled around underneath. I was almost ready to declare this a failure, but having nothing to lose, I stuck it back in the oven for 25 minutes. The pie browned a little more, but was still very loose. Once again, I pulled it out and let it cool.


The second time around, the pie definitely firmed up after cooling. Cutting into it, the filling was very yellow, almost like a lemon pie. The flavor of vinegar is definitely present, but it's not off-putting. This pie is thin and sweet - almost sweet for sweet's sake. 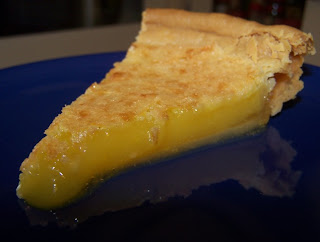 Chess pie - at least this recipe - isn't my favorite, but it has the definite advantage of being a quick pie to pull together from the pantry. If I try this again sometime, I think I'll swap lemon juice for the vinegar, and I'm interested to see how this compares to my collected lemon pie recipes in a couple months.

UPDATE: I baked this pie on a Wednesday night and Thursday morning. After having multiple samples between myself and Tiffany, and sharing with some visitors, I decided on Sunday (after a breakfast pie-binge - more on that later) to toss the remaining third of the pie.* As noted above, this is a sweet pie, and we didn't really need it hanging around.
I couldn't resist taking one last bite as I was throwing it out. It was surprisingly better than I recalled. After the second bake and cool, I stored it in the fridge, more out of habit than anything. Saturday morning, I moved the pie onto the counter to make room for other things. I'm not sure whether it was the three days since being baked or the full day at (cool) room temperature, but the vinegar flavor had mellowed significantly. Still sweet, no doubt, but more rounded (if that makes sense).
If you're going to tackle this pie, I would recommend NOT refrigerating it and perhaps even waiting a day or two before serving. One possible etymology of 'chess' pie is a corruption of 'chest' pie, as in pie chest (or pie safe), as in "keeps well in a pie chest" - I can certainly see why.
*Yes, we threw away pie. We are trying to lose weight, after all! I'm serious about the standing invitation - if you're in the area and know how to get a hold of me, stop by for some pie! Odds are we've got something lying around to sample.

Next time: Fruit pies at long last!
Posted by Zeb Acuff at 3:14 PM