In honor of Pi Day (3/14, get it?), I resolved at the very beginning of this project to make three full-size pies and a little mini-pie meant to represent about 14/100ths of a 9-inch pie. After realizing that meant baking at least nine pies throughout the month of March, I scaled it back to just two.

I also had, for some reason, made the connection between my mother (who, as a math major in college, earned the nickname Pi), my mother-in-law (a high school math teacher) and chocolate, so my Pi Day pies were all slated to be chocolate pies.

From there we get to today's entries: Chocolate Malted Pie and Chocolate Peanut Butter Pie.

I love malt powder. Not just a malted milk, or a vanilla (or coffee!) malted milkshake, or a dusty road sundae, but dip-a-spoon-into-the-malt-powder-canister-and-eat-dry-mouthfuls is what I'm talking about. In fact, most places I order a malted, I request extra malt, because the flavor doesn't come through strongly enough.

As is the case, unfortunately, with this pie.

Don't get me wrong - this is a delicious, rich pie. Anything that includes four versions of chocolate (Oreo crust, malted ganache, chocolate whipped cream, and malt balls) has to be good. But if it's advertised as a malted pie, I want the sweet malty flavor to be front and center.

Basic construction is as follows: 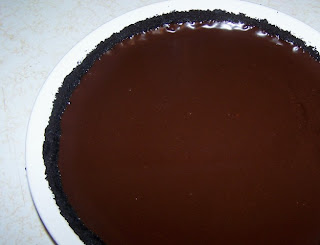 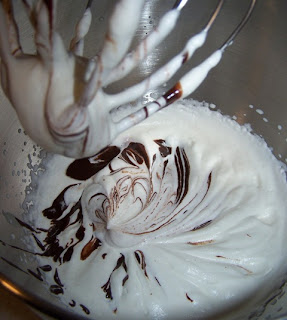 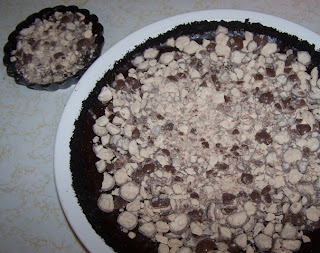 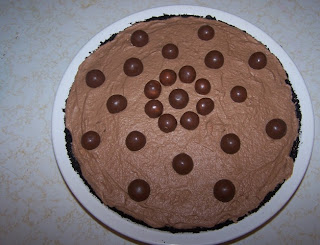 Sorry, no slice pictures this round. The large pie was made to be given away to a friend at church. We had to taste it though, so here comes the mini-pie! Better on the calories for us, too. 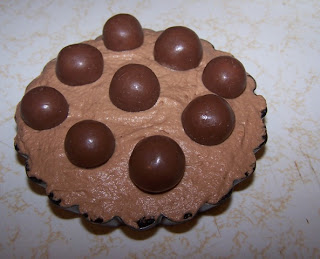 If I try this again, I'll definitely up the malt powder in the ganache until I can actually taste it.

Some of you reading this might consider me insane for my next comment, but the truth of the matter is... I'm doing Weight Watchers in the midst of this grand pie adventure. The pie plan came first and was too much fun to cancel, so here we are. I've already lost about ten pounds since the first of the year, even without getting much exercise (I'm waiting for spring to, well, spring so I can get out and walk more frequently).

All that to say that I've been meticulously calculating WW points (old system) for all of my pies. When I ran the numbers for the Chocolate Peanut Butter Pie, I nearly fell on the floor. Whereas most of the pies have been in the range of 9-12 points for a reasonable 1/8 slice (lowest so far was Cinnamon Sugar Pie at 7 pts/eighth; highest was Vanilla Cream Pie at 12.5 pts/eighth and the Chocolate Malted Pie above at 16 pts/eighth), CPBP blew them all away. 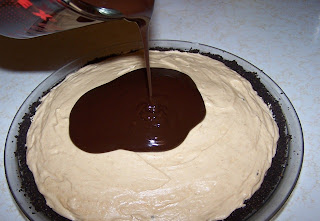 The caloric perfect storm of peanut butter, cream cheese, whipped cream, and mocha ganache (not to mention the chocolate cookie crust) results in this pie topping out at a total of 181 points, or 23 points per eighth. Even cut to twelfths, that's still 15 points per slice - more than one-third of my daily total! 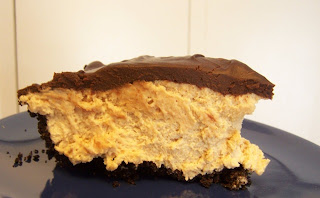 On the other hand, a single bite is sufficient, if you can restrain yourself. This is a really good pie, although I myself am not so keen on the peanut/cream cheese flavor combination (Tiffany loved it). Our strategy for not eating ourselves sick was to pawn it off on others - I think we got rid of the entire pie within a day.

Cooking Notes
This pie has a few distinct steps. If you break up the steps and make the peanut butter-cream cheese mixture ahead, be sure to let it fully return to room temp before proceeding (or just re-cream it): it needs to be soft to fold in the whipped cream. Note that the recipe makes a lot of filling and it will seem like it won't fit in the crust. It will - the profile of the pie is high and rounded rather than flat. 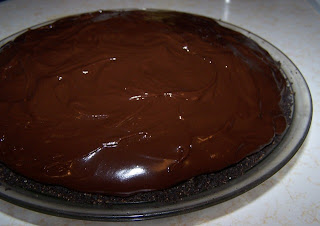 The real take-home element of this pie, in my opinion, is the Warm Mocha Sauce (essentially a mocha ganache) that is poured over the chilled peanut filling. This sauce is worth making up for anything you want a topping on, including my family's Mildred's Chocolate Cake, which includes a traditional mocha frosting.

Combine 1⁄2 cup heavy cream, 1 tablespoon of instant coffee or espresso granules, and 2 tablespoons of unsalted butter and bring to a simmer over low heat. Remove from the heat and whisk in 1 cup of semisweet chocolate chips until smooth and glossy dark brown. Stir in 1 tablespoon of light corn syrup and 1⁄2 teaspoon vanilla extract; pour into a heatproof container with a spout (like a 1 cup Pyrex measuring cup) and let cool.

This will set up fairly solidly when cool. If you need to loosen it up before using, microwave for 10-15 seconds, then stir - it should come right back to a pourable consistency.